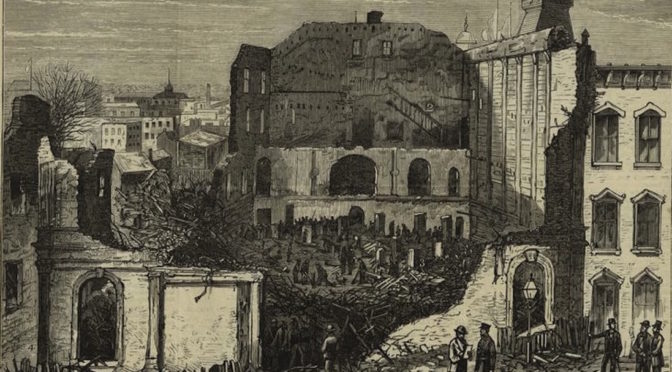 A fire at the Brooklyn Theater in New York kills nearly 300 people and injures hundreds more on December 5, 1876. Some victims perished from a combination of burns and smoke inhalation; others were trampled to death in the general panic that ensued.

During the reading of the information provided you may find common use emotive langue to explain the actions of those attending. We will share snippets of the pages linked to.

Learn about the history of the fire and its victims

A fire at the Brooklyn Theater in New York kills nearly 300 people and injures hundreds more on December 5, 1876. Some victims perished from a combination of burns and smoke inhalation; others were trampled to death in the general panic that ensued.

It is difficult to discuss calmly the frightful disaster which happened in Brooklyn on Tuesday night. No such awful sacrifice of human life has ever been known in this country, shipwreck and the casualties of war alone being excepted. –Â New York Times editorial, Dec. 7, 1876Â

Labeled “Brooklyn’s Holocaust” by the December 7, 1876 National Republican, the Brooklyn Theater Fire was one of the most devastating fires in U.S. history. The fire began when a piece of scenery caught fire and fell on the stage. In a little over 10 minutes, the fire was out of control and the audience thrown into a panic. People clogged stairwells and trampled fellow patrons in an attempt to flee the spreading flames. When it was all said and done, almost 300 people had been claimed by the fire. Read more about it!

“A Theater in Flames,”

“The Awful Disaster of the Brooklyn Theater,”

The date was Tuesday, Dec. 5, 1876–95 years ago today—and the Brooklyn Theatre fire was begin ning, one of the world’s most terrible theater fire disasters, claiming “doubt less over 300 deaths” according to the city regis trar. Just 100 years ago, in 1871, the theater had been built at the spendthrift cost of $127,000; it survived only five years, never breaking even financially, before its tragic destruction.

When the newspapers came out the morning after the Brooklyn Theater fire, headlines shouted, “No Fatalities!”  However, the reality was much different.  With a building touted as having the best fire exits in the city by the fire chief, what happened to cause this catastrophe?

Brooklyn’s theaters have provided entertainment for almost as long as there has been a city of Brooklyn. Until the invention of the moving picture show, the theater could house all kinds of entertainment, from symphonies and opera, to serious drama, to comedies, vaudeville and minstrel shows.

The Entertainment Industry is not a new invention…not by a long shot. By the late 19th century entertainment was very much a part of the urban life-style and, while no one who attended a play in 1876 could have even dreamed of the technology we take for granted today, many of ‘The Industry’s’ best-loved quirks and features were still already in place by that time, and had been for a century or three. You just had to substitute the word ‘play’ for the word ‘movie’.