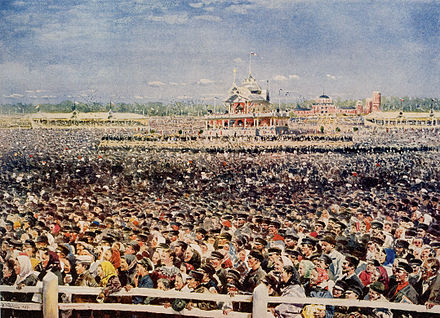 There was nothing grander than a Russian Imperial coronation, and great festivities had been planned to accompany the accession of Tsar Nicolas II on May 13 1896. To ensure that the population appeared suitably ecstatic, Muscovites would be encouraged to celebrate with the help of coronation gifts from their new absolute monarch. The appointed day was May 18. Bars and booths for distributing gifts were erected in a town square in northwest Moscow, at the beginning of present-day Leningrad Prospect.

The coronation of Tsar Nicholas II and the Khodynka tragedy

A few days after the coronation, a tragedy occurred at an event which was supposed to be fun for the general public. On 30 May a public event was put on to coincide with the coronation. The event was held at Khodynka field which was believed big enough for the large amount of people who would be visiting. As part of the celebrations, food including sausages, pretzels and gingerbread were distributed along with drinks. 150 separate buffet zones had been set up to distribute the food and drink to members of the public and pubs were built to accommodate people. On top of the food and drinks, to mark the celebration of the coronation a commemorative cup was given out as a gift.

‘A Programme for the Reign’: Press, Propaganda and Public Opinion at Russia’s Last Coronation

The publicity Nicholas sought for this pivotal occasion proved a double-edged sword. Within days of the Tsar’s moment of triumph, the assembled journalists and photographers would report on another quite different event, the tragic crush at Khodynka Meadow in which thousands of ordinary Muscovites and visitors were killed in the rush for commemorative mugs and free food and drink. In retrospect, this accident, and Nicholas’s seemingly indifferent response to it, seemed to foreshadow events of the reign. For the next two decades, Nicholas presented a personal, reactionary conception of his role to the modern world through the use of nationalistic, sentimental and religious propaganda as his country suffered through two major wars and, ultimately, revolution. Passivity in the face of disaster, and inability to adapt, led to abdication and the murder of the Tsar’s immediate family

More and more people came. There was much jostling and crowding. “The crush was so great a bullet could not have slipped through.” (2) Over the course of the night, made anxious by rumors of shortages, people pushed toward the barricades that guarded the entrance to the fairground in order to be the first in line when the gates opened.

There are many variations of passages of Lorem Ipsum available, but the majority have suffered alteration in some form, by injected humour, or randomised words which don’t look even slightly believable. If you are going to use a passage of Lorem Ipsum, you need to be sure there isn’t anything embarrassing hidden in the middle of text.

1,300 Russians die in one of the deadliest human stampedes in history