1979 The Who concert tragedy 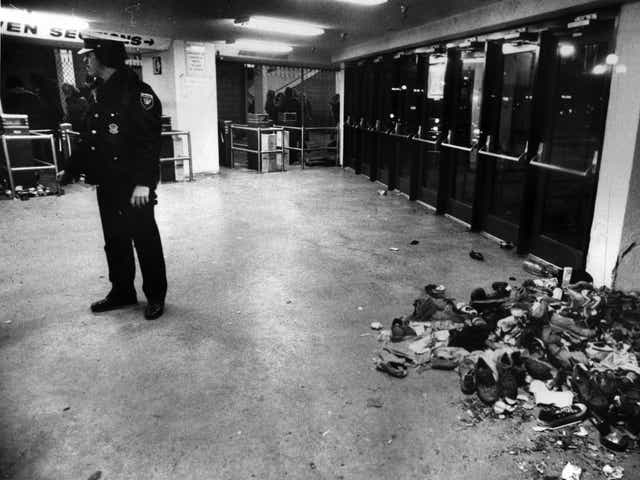 1979 The Who concert tragedy

Rock & Roll Tragedy: Why 11 Died at the Who’s Cincinnati Concert

At about 7:15 on the evening of December 3rd, 1979, Larry Magid sat down to dinner with Frank Wood in the luxurious Beehive Club, a private club in the upper reaches of Cincinnati’s Riverfront Coliseum. Wood, who is general manager of the city’s premier rock station, WEBN-FM, remarked to Magid, who is head of Electric Factory of Philadelphia (one of the country’s leading rock promoters), that the crowd streaming onto the coliseum floor far below them for that evening’s Electric Factory-promoted Who concert seemed to be quite orderly. A “happy crowd,” he said, not at all like the rabble that had disrupted previous “chain-saw concerts” there, like the Outlaws’ fighting crowd and Led Zeppelin‘s mob. The crowd below them was sprinting to get as close as possible to the stage, in the grand tradition of “festival” or unreserved seating. By agreement of the coliseum management (the coliseum is privately owned), Electric Factory and the Who, mostly general-admission tickets had been sold: supposedly 3578 reserved seats in the loges at eleven dollars each and 14,770 general-admission tickets at ten dollars each.

The Who concert stampede left 11 people dead 40 years ago. Here’s what newspaper coverage looked like

CINCINNATI – Eleven people were killed and eight seriously injured at Riverfront Coliseum Monday night in a human stampede through the arena’s doors before the start of The Who rock group concert.

The crush of an anxious crowd pressed Matt Wergers and his girlfriend through a glass door on the Riverfront Coliseum plaza. Then, Wergers remembers, the duo ran through the turnstiles into the arena, where they thought British rock legends The Who had started playing.

THE WHO DISCUSS 1979 CINCINNATI CONCERT TRAGEDY

“You know, I’m still traumatized by it,” Townshend told WCPO in a new documentary called The Who: The Night That Changed Rock. “It’s a weird thing to have in your autobiography that, you know, 11 kids died at one of your concerts. It’s a strange, disturbing, heavy load to carry.”

Panic at “The Who Concert Stampede”: An Empirical Assessment

In life-threatening situations, such as a fire in a movie theater, we might expect people to put their own safety first and behave in ways that might unintentionally harm others. Media accounts of the injuries and deaths that occurred at a 1979 rock concert were consistent with this common-sense explanation. However, as Norris Johnson’s research revealed, concert goers did not “stampede” as the media contended. Instead, they actually tried to help one another. This article explores some of the forces behind unexpected human behavior

Memories of Who concert tragedy linger

Thirty years later, on the open concrete plaza on the west side of U.S. Bank Arena, there is no hint of the tragedy that unfolded there on the night of Dec. 3, 1979.

The Who Discuss 1979 Cincinnati Concert Tragedy

Pete Townshend and Roger Daltrey are remembering the tragedy in which 11 Who fans died 40 years ago in Cincinnati.

A crowd stampede ahead of a concert on Dec. 3, 1979 at the Riverfront Coliseum resulted in the deaths of people aged between 15 and 27, along with eight other serious injuries. In order to avoid the risk of a riot, the show was allowed to go ahead, but the Who were not told what happened until after the main set was over.

AP Was There: Coverage of The Who concert where 11 died

CINCINNATI (AP) — EDITOR’S NOTE — On Dec. 3, 1979, an eagerly awaited concert by the British rock band The Who was transformed by tragedy, as 11 people were killed in a mad scramble by thousands of fans trying to get into Cincinnati’s riverfront coliseum. Three of those killed had attended the same high school in a small suburban city that became forever tied to the group that’s now in the Rock & Roll Hall of Fame. On the eve of the 40th anniversary of the deadly concert, The AP is republishing its report from Cincinnati on that night.