For the past couple of years we at working with crowds have expressed positive opinions on the use of drones at events. We are not talking about public use of drones, but professional and licensed providers.

This week we have taken up the invitation to be part of a flight crew at a festival. An opportunity too good to pass on. Allowing us to see and be part of the operation and see the wheels in motion; or is that blades in rotation, and ask questions on the planning process.

The invitation from Crowded Space Drones (CSD) was greatly appreciated and thankfully our calendar allowed me to be part of the crew. In the run up I was concerned I was going to be tailing on as a spare part and just standing about. Thankfully the CSD team of Beth and Andrew had thought of that and they had kept a space on the team to allow me to actively take part. In saying that, at no point did I touch a drone controller; I am not licensed and the thought of how much a repair bill would be kept me at a safe distance. A pair of hands and eyes is always of assistance and after seeing everything involved, definitely required.

Firstly, if you thought it was just turn up with a drone and controller, send it up and that was it, you have not even scratched the surface. I was greeted by a crew in a van with enough flight cases in it to put your average band to shame. I for one had never thought about all the kit required to service this function. There are battery chargers; cases of them, spare parts, controllers, laptops, iPads, cable after cables, WiFi bits and pieces, extension leads and so many other things we were simple gobsmacked. 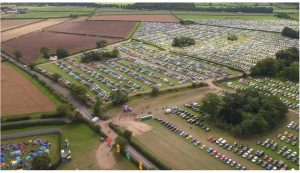 On arriving and after accreditation and vehicle search, it is straight to the control room. CSD provide a live feed straight into the control room cctv system. This was my tell and do part of the day, I just done as a I was told and moved cables and parts that looked like NASA had a hand in designing. I just told myself it was magic and Pixie dust that made it all work; a far simpler explanation than the technical spec that was explained to me, as it was far more complicated than signing into your home WiFi network.

Next up was to make sure the batteries are charged, the take off and landing zone is set up and that signage is implemented to allow those working in the area to understand that drones would be working in the area. A nice touch; well I thought it was, is information being passed to the dog handlers in the area that flights would be happening during the day.

Now that all the prep was done, I felt  like I could start asking questions. The team explained to me that during the planning for the event they provide their own safety and flight plan. Something again I had not considered. They survey the event space and indicate were they can and cannot fly; all complying to the CAA regulations. This then ties in with the event plan and running order of the day. Just like a crowd manager they can then focus on key events such as ingress, circulation and egress. As this is a commercial company I will not divulge the planning process and event deployment in detail as on consideration it would be commercially sensitive. 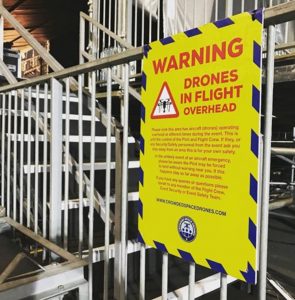 I will now get this out the way and I am not ashamed to admit it. I got great joy out of watching the drones take of the first few times. It reminded me of watching my first model train going around in circles. They are an amazing piece of technology. If you are of the opinion they are just toys, you could not be more wrong.

As the day progressed, the team fed in a live stream of crowd movement and activity. The safety features they follow allow about 20 minutes of flight at a time and the battery never gets below a 30% charge. That in itself allows nearly double didget minutes of flight to return to the landing area. A quick change of battery and it is off again.

As a crowd manager the view it provided was staggering. I spend a fair bit of time planning events and using Google Earth and 3d crowd modelling software. Presented in front of me was a real time version of this. 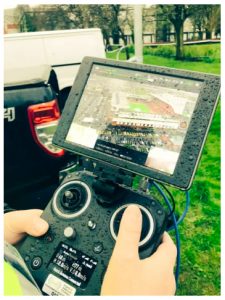 Being able to look down on a crowd from the height a drone can provide, is staggering. From simple crowd flow, to observing site improvements where unintentional pinch points have occurred, to mosh pits and density. As a crowd manager this provided a vast amount of information and the potential to point out dangerous situations before they occur.

The advantages of CSD is that Andrew is a qualified crowd safety managers. He passes on the understanding of crowd dynamics to the team. During the event it was as if they were reading my mind; when I thought I would like to see a part of the site, the drone or camera was already starting to move there.

It is at night, when the drone really comes to life. I never appreciated how sensitive the camera was and that it provided. From a height of 100m, the distance you can see is amazing. I can only imagine it being like living in the top floors of a tower block,what your eyes can see the drone can see.

During the packing up at the end of the night, Beth informed me that they also have an infrared camera that they can attach to the drone.the images they achieve are just as good as those seen from a helicopter.

“The use of drones provides a mobile and manoeuvrable equivalent of a CCTV camera offering alternative views to that of a fixed camera. The drone can access areas where the view of a fixed camera may be restricted and give a more accurate birds-eye-view of crowd flow, with a camera capable of at least 360 degree movement allowing for easy tracking of crowd movement, individuals or incidents. A drone can cover a wider area of site giving a much more comprehensive idea of crowd behaviour in one video feed.”

“Drones equipped with the likes of the Z30 camera can give an image capable of a 30x optical zoom and a further 6x digital zoom, a full facial or body profile from distances of 1km away, as well as the option of thermal imaging. This also enables the drone to be kept a safe distance away from large crowds without compromising the clarity of crowd movement or behaviour before, during or after an event.”

“Less intrusive and more cost efficient than hiring police helicopters to monitor crowd behaviour, particularly post event and in built up areas such as London, where resources can already be stretched,” explained Beth.

With time to consider the egress of the event,it was a sight to behold. As a crowd manager it was possible for me to see the egress routes, traffic diversions, stewarding deployment and although there was no issues; the ability to observe any issues. On top of this, the drone team swept the arena when egress thinned out. This allowed the safety officer to see the sweep in progress and when site vehicle curfew could be lifted. 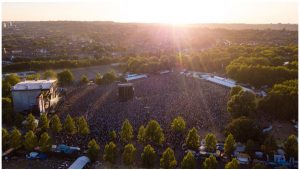 After this opportunity, I went in with a positive opinion and left with a question. Why do all large outdoor events not deploy this provision, the flexibility and vantage point for crowd monitoring if unsurpassed. The only way I can compare this is so having your own police helicopter on call and being able to control what the camera operator is looking at.

I understand the safety concerns a percentage of the industry have in the deployment of drones. This is still a relatively new service and early adventures by armature operators did cause several incidents. All I can say after my short time with the team is that their safety precautions are inline with or not higher than anything within the events industry.

I would like to pass on my thanks to Beth and Andrew for the invite, looking after me so well and putting up with my novice questions.