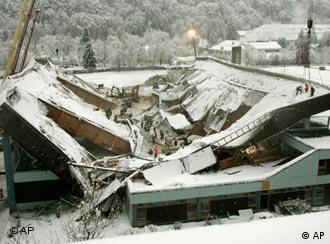 Rescuers searching through a collapsed ice rink in southern Germany have recovered the body of a woman from the rubble, raising the death toll to 15.

BAD REICHENHALL, Germany (AP) — Rescuers halted their search Tuesday for survivors feared trapped for nearly a full day under the wreckage of a fallen ice rink roof that killed 11 people, including six children, fearing the ruins could collapse further.

Today should be about the victims, the survivors, the bereaved, said Bavarian Prime Minister Edmund Stoiber, and not about deciding who was to blame for the ice rink catastrophe.

At least 11 people were killed last night and dozens injured after the roof of an ice rink in the Bavarian Alps of southern Germany collapsed following heavy snowfall.

Emergency services are still clearing rubble following the collapse Monday, January 2, of an ice skating hall in the German town of Bad Reichenhall, situated near the Austrian border in the southern German state of Bavaria. Latest police figures state that 14 dead have been pulled from the building, with one person still missing under the ruined remains of the centre. An additional 34 persons were injured and taken to hospital—many of them suffering broken bones.

PROGRESSIVE COLLAPSE triggered by a timber box beam failure is thought to have caused the cave-in of a German ice rink killing 15 last week.