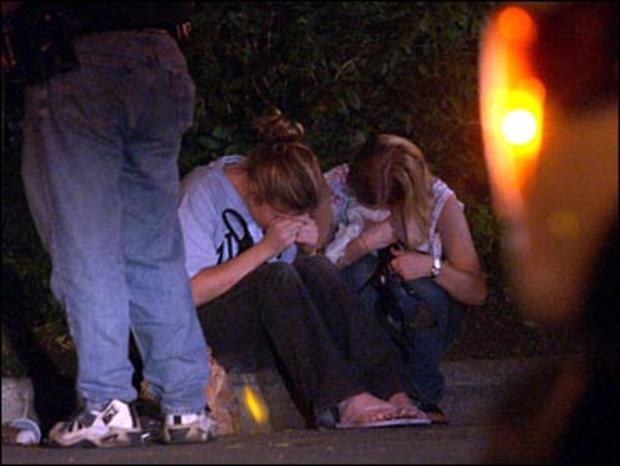 (CBS) It was the first really warm summer night in Chicago’s Lincoln Park, and a group of kids, most just out of college, were looking to make the most of it.
READ MORE

Twelve people were killed in the US city of Chicago when a second-floor balcony collapsed during a party in an apartment building, authorities have confirmed.

A woman who survived a the collapse of a balcony in which at least 12 people died said she heard wood splitting just before she fell.

Friends of victims sit on a curb outside an alley, after an overloaded third-floor porch of an apartment building collapsed during a party early Sunday, June 29, 2003, in Chicago, sending people and debris crashing to the ground. Twelve young people were killed and as many as 57 others were injured.

On June 29, 2003, a third-level porch behind an apartment building at 713 W. Wrightwood Ave. in the Lincoln Park neighborhood of Chicago collapsed under the weight of an estimated 114 people, killing 13 and injuring more than 50.

Chicago, the windy city, is bitingly cold in winter but breezes from Lake Michigan are very welcome in the heat of summer. Much of the city was built in the 19th century, before the days of air-conditioning, and apartment blocks were usually built with balconies. Unlike New York’s famous metal fire escapes, the Chicago versions were generally built of wood.