Unfortunately, this is not about the sublime banger by Public Enemy, released in 1988 on Def Jam. This is a little tale about HYPE!!!! Now anyone that does not understand the meaning of this, the UrbanDictionary, describes this as:

“when someone gets excited about something”

To most of us this means, overreacting, exaggerating, exuberant passion even. But, let’s all pretend that we are still hip and understand what your average 15-25 year old is talking about; so “Hype” it is. 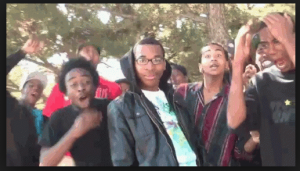 Why; you may ask, is a website about Crowd Safety Management talking about a subject like this. The reason is simple, because it has an effect on crowds. Sometime positive and other times it can be a pain and if it goes too far, problematic or dangerous.

Let us try and explain what we mean (again, this is a blog, not an academic piece of work), and where this can affect crowds. A large part of this lies at the feet of social media. Before the information age, social media; Twitter, Facebook, YouTube or Snapchat, the closest we got to trends where regional and took a long time to be established (although, we still do not forgive Live Aid for showing U2 and the popularisation of the mullet). This is a good example though, TV assisted in spreading trends faster, how football fans reacted, clapping along to Queen singing Radio Gaga or many failed attempts in discos to moonwalk. Visuals play a massive part in spreading trends, visual input enhancing the experience.

Now though, the use of social media and mobile technology assists in speeding up the trend process form months or days to hours. This is not just in local areas, this is nationally or internationally.  A prime example is the madness that was bottle flipping. Kids that had hundreds of pounds/dollars ect of entertainment systems and platforms, found hours of entertainment in flipping a bottle and attempting to make it land (yes……madness). In this we see the basic reactions to hype. Initially it was just excitement and happiness of achieving the task, the reactions and overreactions grew as the trend expanded and increased in shares and trending. These reactions had to be bettered to become the next person or video clip to trend. In this, you did not have to be famous, you just had to have access to a social media account and have a reaction that the masses embraced and tried to copy……..and so the game begins.

In our age of disposable superstars; that trend for a day or hour and then replaced by the next person, we find reactions becoming more and more extreme. The simplest of things can incite a fake hysteria that is used to draw attention to you and your social group. The example of the Nutmeg (putting a football/soccer ball through the legs of you opponent) is a prime example of this. The troops/posse/or whatever is cool for a group of friends now hero worship the winner, running around, shouting, jumping on one another.

Both of these simple examples are no real worry on there own, but they can be transferable to crowds. The example of the nutmeg, what if you replicate that in a football stadium when a goal is scored? The reaction trends, so the opposition or other fans try to outdo them (think of it as the fans version of what is going on the playing field).

We can also look to platforms such as Youtube and Tv for spreading the use of Pyrotechnics in football stadiums and music festivals. Your average cameraman at a festival loves those bright glowing stick and the visual impact. Off the back of that we end up putting a spotlight on the handler, so more and more want to do it so they gets seconds of fame; no matter what harm it could cause to them or others.

Youtube has allowed Ultra groups to share and promote there Tifo displays. Spectacular, mesmerising, tribal…..dangerous…..? As with the other fan groups the competition to be the biggest, baddest and best is ongoing. We are now at a point that some look like the stadiums are burning down and no one sees the game for large portions at a time, the spotlight is no longer on the pitch but the stands and the fans.

We are also starting to see this in music genres. An example of this is at urban music festivals; the mix of dance music, hip hop, drum and bass, techno. Historically groupings that embraces the latest trends not only in music, but fashion. Now we see crowd reactions that are more in line with metal festivals, mosh pits, crowd surfing and stage diving. Being a fan of all these genres, I managed to experience the thrill of a mosh pit at a metal gig and the style and attitude of a hip hop gig. I recall watching two guys going at it UFC style because one stood on the others trainers (Adidas Shell Tops from memory, box fresh). Now, you see larger parts of the crowd jumping on one another and slamming into those around them.

This trend is expanding faster due to the sharing of videos and the reaction to one upmanship. Metal fans see this as normal behaviour; so are less likely to share it, new groups to this activity want all those not there to see how much fun they are having, how cool they are….how hype they are! The issue with this though is the speed of the trend. We now see crowds that have not spent years learning the rules and what is safe or not, trying to imitate the ritual. This leads to injury, possible fights and if it expands can lead to crowd collapses or crushing.

All this provide example of how crowd managers should watch trends that are picked up by crowds. Understanding why a crowd are doing something can assist you in decision making; is it normal or abnormal. What we may see as a silly little video can suddenly be a part of your event and you do not know how to react to it. So, unlike the title of this blog…..maybe believe the hype!