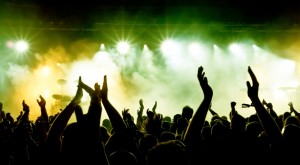 Brutal fight after a Redman and methodman concert

Plies Gets Slammed Off Stage During Concert In Tallahassee FL Club

Overly Excited Fan At B.o.B Concert in Sacramento Gets Restrained

Fight breaks out at Eminem concert in Wembley

Odd Future jumps off stage to fight guy in the crowd!– YouTube Link

Fight in crowd while Boosie performs in West Palm Thanksgiving 2014