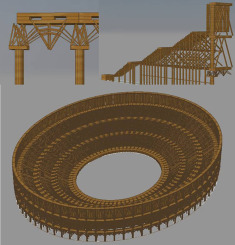 Failure at Fidenae: Visualization and Analysis of the Largest Structural Disaster in the Roman World

ABSTRACT
A digital reconstruction of the amphitheater at Fidenae, which collapsed in 27 A.D., was
produced as a result of textual, architectural, archaeological, and engineering analysis. Primary
literary sources, such as Tacitus and Suetonius, examined in conjunction with proximal
archaeological evidence, allowed for the most probable seating capacity and the scale of the
amphitheater to be determined. Architectural evidence of other wooden structures found on
Trajan’s Column allowed for a most probable projection of a three dimensional model to be
created using AutoCAD. With this most probable model determined, engineering analysis was
utilized in order to understand the failure at Fidenae almost 2000 years ago.

Sometimes, things fall apart. In examining stadium collapses over the years, we discover that
they may be due to weather anomalies or natural occurrences, such as the record snowfall in 2010 that collapsed the roof of Minneapolis’ Metrodome or the 1994 earthquake that snapped the 1 moorings of the 17.5 ton Jumbotron at Anaheim Stadium, sending it crashing into the upper tier
of seats. Often, though, failure is attributable to engineering error: a professional misjudgment, a 2
miscalculation, or an inability to resist pressure, such as using lower quality materials to save
money.

Tiberius Claudius Nero, born on November 16, 42 BC, was the second emperor of Rome and was a highly successful soldier. Despite being one of the greatest Roman Generals, Tiberius was unable to achieve success and popularity as a ruler, which started after 14 AD. However, during his rule, gladiatorial games became very much irregular and were nearly banned.