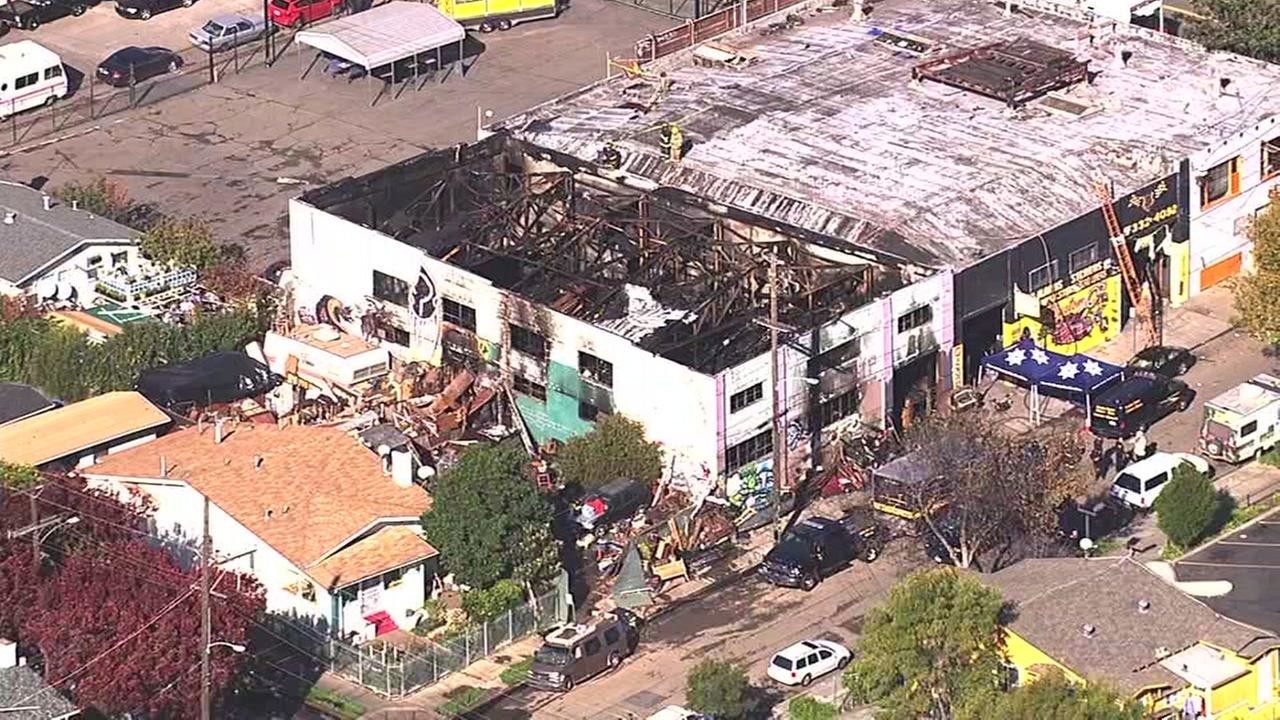 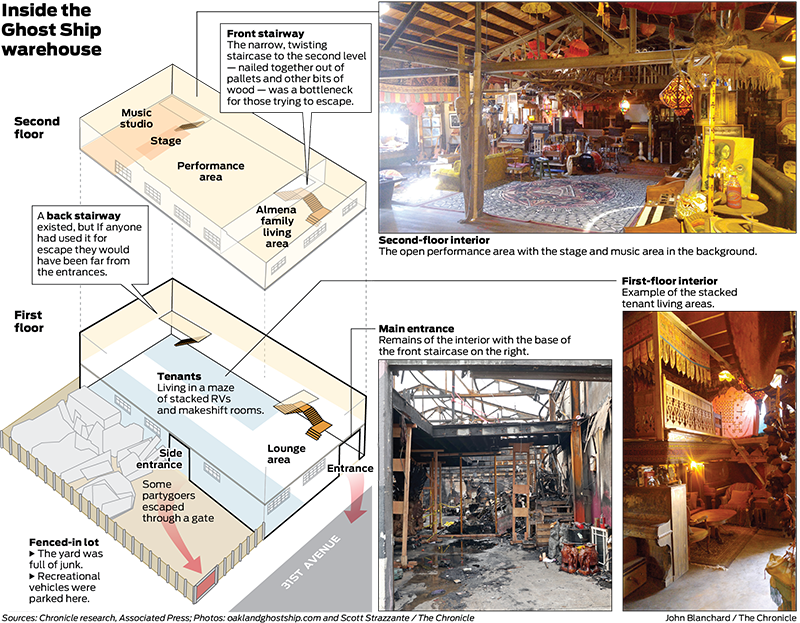 The first 911 call was from an occupant of 1315 31st Avenue, Carmen Brito, using cellular phone
number People fleeing the warehouse also ran to Oakland Fire Department Station #13, located at 1225 Derby Avenue, which is one block, approximately 472 feet according to Google maps, from the fire building. According to firefighters, people were knocking on the fire station doors when the firefighters were getting ready to respond to the fire, having received notification from Oakland Fire Dispatch. Carmen Brito told investigators she was in her living space, as she had gone to bed around 10:00 PM. Brito stated around 11:20 PM. she woke up and noticed her space was filled with smoke and she could see an orange glow outside of her living space. Brito stated she got up and put on her shoes and coat but felt like her movements were sluggish. Brito stated she walked down her steps and noticed the living space of “Swan” (Leah Vega) and “Dragon” (David Calvera) was on fire. She believed the flames were approximately 8 feet high. Brito stated she went to the front of the warehouse and called 911. (See “Witness Interviews” for additional information) 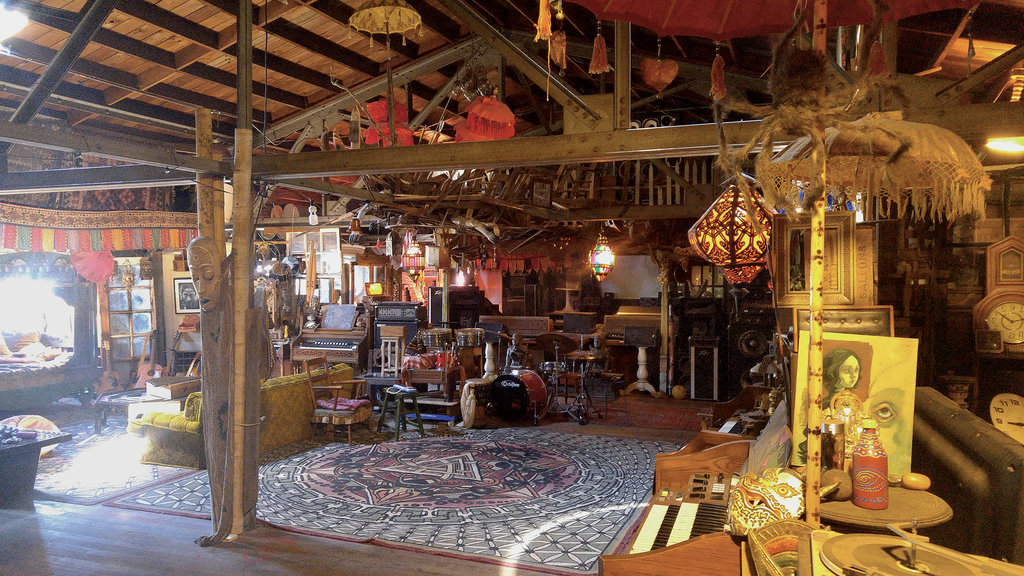 Increasing certification of occupancy compliance within the city of Fairborn 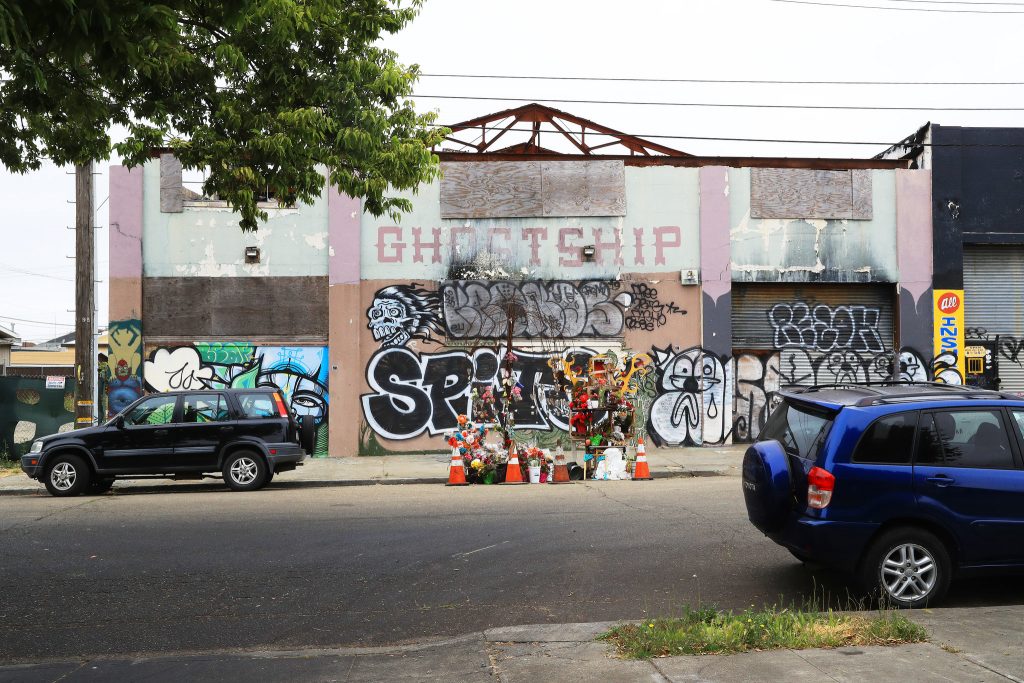 Case No. RG17843691 and Related/Consolidated Claims
In Re the Ghost Ship Incident
Master Claim Against the City of Oakland (Gov’t Code Section 910)
To Be Used with Notice of Adoption of Master Claim Form

Deracinated Dispossessions: On the Foreclosures of “Gentrification” in Oakland, CA

This paper challenges dominant geographies of urban theory by conceptualising the dynamics of displacement in Oakland through place-specific histories of racial/spatial politics. It argues that the repeated transposition of a San Francisco-based model of “tech gentrification” results in deracinated dispossessions, or accounts of displacement uprooted from grounded histories of racial violence and resistance. It also argues that, while urban scholars acknowledge the role of historical difference in contouring dispossessions in metropolitan versus postcolonial cities, this consideration should be broadened to account for the racial/colonial dimensions of urbanism in the US as well. Treating Oakland as a “crossroads of theory”, this paper joins calls for a deeper engagement between postcolonial urban studies and critical race and ethnic studies from North America. Drawing upon the authors’ activist and empirical work, it contends that “thinking from Oakland” demands a foregrounding of racial capitalism, policing, and refusal.

OAKLAND, Calif. (KTVU) – The major focus for the victims’ families of the Ghost Ship fire has been on the criminal trial, but in the background civil attorneys are making progress on the lawsuit that calls out many more than just the two criminal defendants.

Ultimately civil attorneys hope to show others are to blame for what lead up to the deadly fire that killed 36 people in December 2016. The city of Oakland, the building’s owners, utility Pacific Gas and Electric, and specific individuals are all named in the lawsuit.

Victims of the 2016 Ghost Ship warehouse fire and their families can pursue their civil case against Pacific Gas and Electric Co. in state court, the judge overseeing the company’s bankruptcy case decided Tuesday.

But any money they recover from PG&E, either through a trial or a mediated settlement, must be tied to the company’s insurance proceeds, U.S. Bankruptcy Judge Dennis Montali said at a hearing in San Francisco.

Oakland police responded to earlier party at Ghost Ship, but took no action before deadly fire

Long before an inferno consumed the labyrinth of dangers inside the Ghost Ship warehouse in Oakland, city police officers were told it was illegally occupied, and rolled to the place because of complaints about unpermitted “raves.” There were fights, fires and reports of guns. Building inspectors showed up, too.

None of that was enough to save the 36 people who perished in December amid the warehouse’s makeshift warren of wires, ramshackle stairs and sleeping cubbies.

Many of the 36 victims of the Ghost Ship fire were found in clusters — some in areas never touched by flame and others amid severely charred debris, according to an investigative report released Monday detailing the difficulties recovery teams faced after the Dec. 2 blaze in the artist collective.

Only seven of the victims were found on the second floor of the converted warehouse, in a section that did not collapse or burn but had extensive smoke damage, according to the report on Oakland’s deadliest fire.

Investigators were beginning to get a sense of the final chaotic moments for the 36 people killed in a fire at a converted Oakland warehouse, as they made progress on the search for the cause of the blaze.

Oakland’s planning director, meanwhile, admitted that the building had not been inspected for three decades, despite what neighbors said were numerous complaints about accumulated trash, graffiti and other blight.

The search for bodies ended Wednesday after a final run through with cadaver dogs, and the death toll stands at 36, making it the deadliest structure blaze in California since the 1906 San Francisco earthquake and fire

Ghost Ship founder testifies at manslaughter trial: ‘You can’t put into words how I feel’

With his head bowed and his voice quivering, the man who founded the Oakland art installation that turned into the site of one of the deadliest blazes in California history took the stand in his manslaughter trial Monday, expressed remorse and appeared crestfallen as relatives of those who died in the Ghost Ship warehouse fire looked on.

Two proprietors of the Ghost Ship warehouse in Oakland, where 36 people died in a fire in December, were arrested Monday and charged with felony involuntary manslaughter related to the inferno.

OAKLAND (CBS SF/AP) — In a surprise move, a judge on Friday rejected a plea agreement for Ghost Ship warehouse master tenant Derick Almena and creative director Max Harris for the fire at the warehouse in Oakland’s Fruitvale district in December 2016 that killed 36 people.

As he handed down his decision, Judge James Cramer said Almena didn’t accept “full responsibility and remorse” for the fatal blaze which occurred during an unlicensed concert at the dilapidated Oakland warehouse known as the “Ghost Ship.”