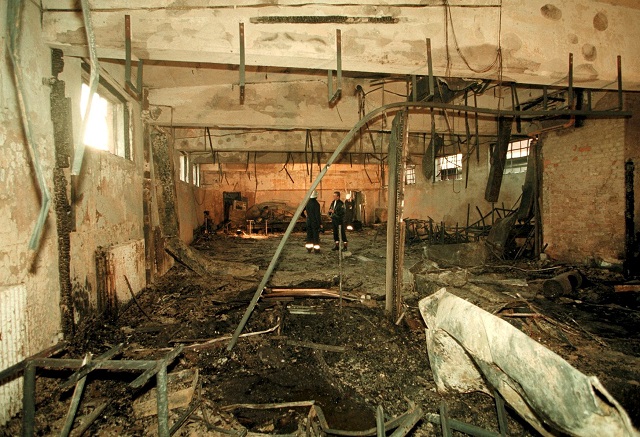 THE WORST fire disaster in Sweden’s recent history claimed the lives of 60 teenagers when a blaze ripped through a disco at an immigrant cultural centre in Gothenburg.

After conflicting reports about what caused the fireball which turned the second-floor hall into an inferno, police last night refused to rule out a arson attack.

This has provoked deep anxiety among ethnic minorities in a city appalled by the scale of such an unexpected tragedy.

A torchlight procession is planned to march from central Gothenburg’s Gustaf Adolf’s square at 7:00pm and continue up to Backaplan near where the tragedy took place, and where the permanent memorial will stand.

The memorial, designed by artist Claes Hake, will be unveiled by young people from an association created for relatives of the fire victims, Brandoffrens anhöriga (BOA).

The story of the biggest fire disaster in Swedish history

At a Halloween party in Gothenburg in 1998, a fire started by four youths led to one of the deadliest disasters of modern Swedish history. Sixty-three young people lost their lives and many more were injured. Twenty years on from the tragedy, The Local looks back at what happened.

Between 340 and 400 people, many of them teenagers, had gathered in a building in the harbour district of Gothenburg to celebrate Halloween. A Macedonian cultural organization had rented out its premises for the night, with the external organizers telling authorities the occasion was a birthday party for 50 people.

The fire broke out around 20 minutes before midnight. It originated in an emergency exit stairwell and at first went unnoticed by the partygoers, who put the smoke and smell down to the smoke machine. Even after one of the DJs noticed the fire and warned the attendees to start calmly leaving the venue, many didn’t realize the scale of the disaster.

DEDICATED SITE TO THE INCIDENT

A fire developed in a facility being used as a discotheque that resulted in death for 63 young people. The rescue operations, ambulance responses, medical care provided at the scene, hospital operations, and psychosocial responses are described. Bodies blocked the exit and many survivors had to evacuate by leaping from windows. A total of 16 ambulances were used. Survivors and people not directly involved in the incident created disturbances and some even attacked responders. Many of those who escaped early suffered mild inhalation injuries and those who escaped later, sustained more severe inhalation injuries. High levels of both carbon-monoxide and cyanide were detected at autopsy. A total of 213 persons were transported to hospitals, 85 by ambulance. Most who died at the scene had severe burn injuries, were unconscious, or suffered from fire-gas injuries. A total of 150 victims were admitted to a hospital, of which 74 (49.3%) required intensive care. Only one of the four hospitals actuated a disaster alert. Psychosocial support was complicated due the multicultural characteristics of those involved. Support to the survivors and relatives of the victims was provided by representatives of various religious organization, non-profit organizations, and by the government of Gothenburg. Many recommendations are provided to better prepare for future events.