Hajj pilgrimage: more than 2000 dead in crush near Mecca

On a day that has not been seen in our industry in 10 years, we have created this page to collect initial reports and updates. It is upsetting when a single life is lost during a planned and organised event, the numbers that have been printed and reported today and tragic.

Please ignore all references to the words “Stampede”, this site condemns the use of this description of a crowd related incident as misleading to the reader. Please read the related research by professional and respected practitioners in the field of crowd safety management, risk analysis and phycology to better understand the events of today 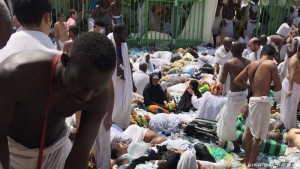 Saudi officials have denied reports that more than 1,000 people were killed in a stampede near Mecca last week while undertaking the Hajj pilgrimage.A Nigerian official told the BBC the bodies of 1,075 victims had been taken to mortuaries in the city of Jeddah – higher than the official toll of 769.

Tragic incidents like the crowd crush that killed more than 700 people during the Hajj pilgrimage in Saudi Arabia last week are terrible accidents, but they don’t play out the way we might think, says one expert on crowd behaviour.

The crush and stampede that struck the hajj last month in Saudi Arabia killed at least 2,177 pilgrims, a new Associated Press count has stated, after officials in the kingdom met to discuss the tragedy.

A crush near Mecca last month killed nearly three times as many people as Saudi Arabia has admitted, according to a tally by the Associated Press (AP). AP said on Monday that at least 2,110 people died in the tragedy at the annual Hajj pilgrimage – far more than the official Saudi death toll of 769.

Hajj pilgrimage: more than 700 dead in crush near Mecca

The Guardian
The Saudi monarch, King Salman, ordered a review of the kingdom’s plans for the hajj after the disaster. Speaking in a live speech broadcast by Saudi-owned al-Arabiya television, he also said he had asked for a swift investigation into what he …

The deaths— at an intersection in Mina, about six miles east of the city — occurred around 9 a.m. on the first day of Eid al-Adha, one of the holiest days in the Muslim calendar, as millions of Muslims were making their pilgrimage, or hajj, to Mecca …
Hajj pilgrimage has grim history of stampede deaths
ITV News
The deadly mass stampede at the annual Hajj pilgrimage has seen tragedy return to a holy festival blighted by a history of crushings. The area around the Mecca has long suffered major fatal events in past years, peaking with the crushing of 1,426 … 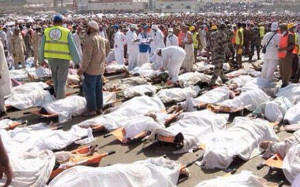 Stampede kills more than 700 at Hajj pilgrimage near Mecca
CNN
The ceremony was the scene of stampedes and hundreds of deaths in the 1980s and 1990s as pilgrims passed a crowded bottleneck area leading to the small pillars on the ground. In 2006, a stampede there killed at least 363 people. After that, the Saudi …

Stampede at Saudi hajj kills 717, leading to question: Why again?

Los Angeles Times
How could it have happened again? Anguished relatives and stunned pilgrims demanded answers after at least 717 people were killed and 805 injured Thursday in a crushing crowd outside the holy city of Mecca, according to Saudi Arabia’s civil defense …

Mecca stampede: At least 717 killed and hundreds injured in crush during hajj

Telegraph.co.uk
It was installed by a British company, CrowdVision, following the deaths of 346 pilgrims in 2006, but the firm told The Telegraph that their equipment did not cover the entire area. “Our company has an active involvement in the Hajj, and the Saudi …
Stampede near Saudi holy city kills more than 700 on hajj pilgrimage
Washington Post
The death toll of 717 — which Saudi officials said still could rise — marked the deadliest incident during the annual hajj pilgrimage in a quarter of a century. One survivor said people toppled “like dominoes” before being trampled or suffocated …

Al Jazeera America
The crush happened in Mina, a large valley about three miles from the holy city of Mecca that has been the site of Hajj stampedes in years past. In addition to the deaths, at least 805 others were injured in the stampede, officials said. It was the … 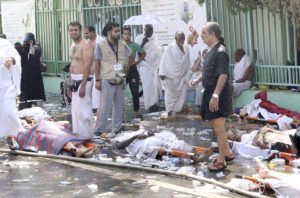 The Guardian
Saudi Arabia’s latest disaster – the deaths of at least 717 pilgrims on the hajj– raises troubling but grimly familiar questions about organisation, safety and levels of competence in the kingdom during the showcase event of the Muslim calendar. With …

UN News Centre
24 September 2015 – United Nations Secretary-General Ban Ki-moon has expressed deep sadness to learn of the death of more than 700 Hajj pilgrims, as well as of injuries to many others caused by a deadly incident in Mina Valley, near Mecca, in Saudi …

TIME
The disaster was the worst to strike the hajj since 1990 when more than 1,400 people died in another stampede inside a tunnel near Mecca, also on Eid Al-Adha. The deaths also pose a new challenge for Saudi Arabia’s King Salman, who ascended to the …
[RAW FOOTAGE] Hajj stampede: At least 300 pilgrims killed, 400 injured near Mecca [UPDATED]
Updates from 7 days prior to the 10th October 2015
Crowd management: Have we seen the last of the Haj stampedes?
According to the latest Associated Press report, the number of pilgrims to have died in the crush during this year’s Haj has now risen to 1,453. This makes it the stampede with the highest death count among all previous such incidents during Haj.
Hajj stampede death toll raised to 1,453
A fresh tally of casualties killed in a stampede near Mecca last month has raised the death toll to 1,453, making this year’s incident the deadliest recorded during the hajj.
Hajj stampede: Search for answers after tragedy
More than 750 people were killed in last week’s stampede during the annual Hajj near the holy city of Mecca, but the exact circumstances of the tragedy remain unclear.
Hajj stampede: What we know so far
More than 750 people have been killed and more than 900 injured in a stampede during the annual Hajj near the holy city of Mecca.
Expert articles
Hajj crush: how crowd disasters happen, and how they can be avoided
My story comes from the Notting Hill carnival in 1999, though you may have your own. It was sunny and there wasn’t really a plan, other than to wander the streets and enjoy ourselves. Towards the end of the day, we came to a crossroads flooded with thousands of people. Like everybody else, we headed in.
After billions spent on safety, Saudis lost control of crowd
DUBAI/RIYADH: Pilgrims reported feeling the hands of their relatives slip away into the crowd on Thursday morning when a crush at the Mina camp in Mecca killed at least 769 in the deadliest hajj disaster in a generation.
How human stampedes, like the one near Mecca, turn deadly
On Thursday, a stampede near the holy city of Mecca left more than 700 people dead, with hundreds more injured and the death toll still rising. The stampede, which occurred during the peak of the annual hajj pilgrimage, is just the latest in a regular string of such events at the site — but it’s the deadliest one in 25 years.

Today saw the worst tragedy at the Hajj in Saudi Arabia for 25 years, as 717 Muslim pilgrims were killed and nearly 900 injured in a crowd crush while on their way to the holy sites of Mecca.
Hajj Pilgrimage Safety Challenges Crowd Simulator Technology
A crowd stampede that caused at least 769 deaths at the annual Muslim pilgrimage to Mecca provided a stark reminder of the safety challenges at the most congested public space in the world.
Here’s how to make the Hajj safer – by better understanding crowd psychology
The crowd crush at the annual Hajj pilgrimage in Saudi Arabia has claimed the lives of more than 700 people and injured at least 850 more.
Tweet
Translate »