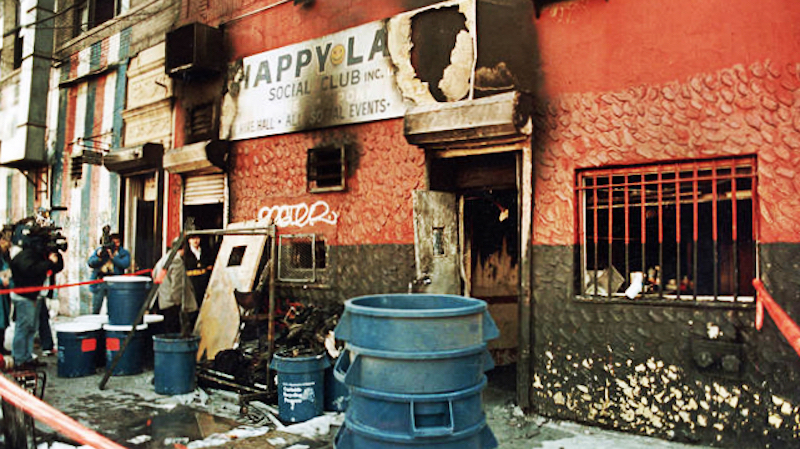 Happy Land Fire at 30: ‘I’m Still Getting Through It’

The emergency medical services (EMS) incident commander, who was there the night nearly 90 people perished in an illegal nightclub fire, still thinks about what happened. Although Peter Hosey has long since retired from active duty in New York City, he is still coming to terms with what happened on the night of March 25, 1990.

New York City has seen more than its share of deadly fires in social clubs and nightclubs operating illegally.

ANALYSIS OF THE HAPPYLAND SOCIAL CLUB FIRE WITH HAZARD I

In the early morning hours of March 25,1990 a tragic fire took the lives of 87 persons at a neighborhood club in the
Bronx, New York. A few days later, the New Yo& City Fire Department requested the assistance of the Center for Fire
Research (CFR) in understanding the factors which contributed to this high death toll and to develop a strategy
that might reduce the risk of a similar occurrence in the many similar dubs operating in the city. It was not the purpose of the CFR work to examine cause and origin, nor criminal or negligent actions which may or may not have taken place
before or after the incident. In responding to this request, CFR staff visited the fire scene on March 29 to obtain information needed to perform an analysis with the HAZARD I Fire Hazard Assessment Method.’ Physical measurements taken on site along with floorplan drawings and newspaper accounts provided the only data on which this analysis was based. No material samples were taken and no testing was performed.

Twenty-five years ago, what was then the biggest mass murder in U.S. history turned a New York City dance club into a smoky, flame-filled inferno that left dozens of people dead, some with drinks still clutched in their hands.

The Gentrification of Nightlife and the Right to the City: Regulating Spaces

THE HAPPY LAND FIRE In March 1990, a fatal fire broke out in a small, 150-person capacity social club called Happy Land, located in the Bronx. #

The Happy Land Social Club Fire Tragedy refers to a tragic fire which took place at The Happy Land Social Club, an unlicensed social club in the Bronx located at 1959 Southern Boulevard.  It took place after an argument between JULIO GONZALEZ, a Cuban refugee and LYDIA FELICIANO, his ex-girlfriend.  After being kicked out the club, he found a container in the street, filled it with $1 worth of gasoline bought from a nearby gas station, returned and set fire to the only known exit in the venue.  Most of the victims died from smoke asphixiation.