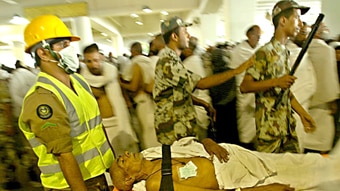 The death toll, if confirmed, is one of the highest in recent years for the annual ceremony, in which millions of Muslims retrace the journey of the prophet Mohammed.

A stampede during the ritual stoning of the pillars at the climax the Hadj pilgrimage, 1 February 2004, in Saudi Arabia resulted in the deaths of 244 people. The stampede occured near the holy Muslim city of Mecca, as pilgrims scrambled to throw stones at pillars representing the devil. It started at 9 A-M local time and lasted for 27 minutes. Officials say more than 200 people were injured, some seriously. Two million Muslims are attending the Hadj this year. Last year 14 pilgrims, including six women, were killed in a stampede during the first day of the stoning ritual. The worst toll of the pilgrimage was in July 1990, when more than 1400 pilgrims were trampled or asphyxiated to death in a stampede in a tunnel. (From: ABC Radio Australia News)

A stampede at the Hajj pilgrimage in Saudi Arabia has left at least 244 people dead, the largest number killed at the event since 1997.

MECCA, Saudi Arabia (CNN) — A stampede Sunday morning killed 244 Muslim pilgrims and injured another 244 at a stone-throwing ritual which has been the source of deadly tramplings in the past, according to Saudi’s health minister.

Nearly 250 Muslim worshipers died in a hajj stampede Sunday during the annual stoning of Satan ritual in one of the deadliest tragedies at the notoriously perilous ceremony.

The tragic deaths of 250 hajjis [pilgrims] due to stampede at the Jamarat [temptation-stoning] site at this years Hajj and the previous accidents that have occurred require a serious analysis. We must ask why they perished and what can be done to prevent such unfortunate deaths in future.