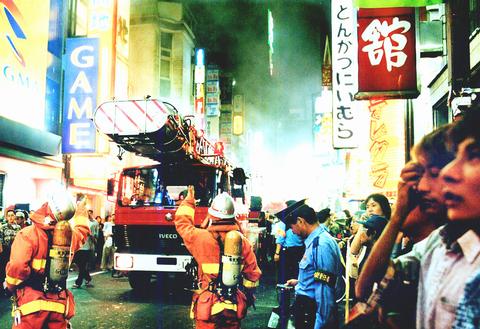 A powerful fire and explosion ripped through a mah-jongg parlor and an adult entertainment club in the Kabukicho entertainment district of Tokyo’s Shinjuku Ward early Saturday, killing at least 44 people and injuring three others, authorities said.

The victims — 32 men and 12 women — were among 47 people who were taken to about 20 hospitals in Shinjuku Ward and surrounding areas. The three survivors suffered minor injuries after jumping from the four-story Meisei 56 Building.

In one of Tokyo’s worst fires ever, 44 people were killed early yesterday when an explosion and blaze ripped through a crowded mahjong parlor and bar in the capital’s most popular late-night entertainment area.

TOKYO — An explosion and fire tore through a gambling parlor in a bustling Tokyo nightclub district early today, killing at least 44 people in one of Japan’s deadliest blazes in years, officials said.

A fire in Tokyo’s Kabukicho entertainment and sex-trade district early today killed at least 44 people and badly injured three others in the city’s deadliest blaze since World War II.

Around 1:00 a.m. Saturday morning, a mah-jongg parlor on the third floor of this building exploded, setting the third and fourth floors ablaze. A few people tried to save themselves by jumping out of the building.