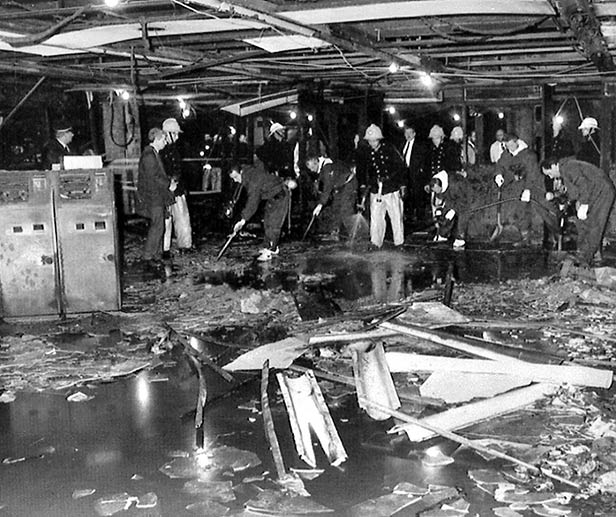 The King’s Cross fire claimed the lives of 31 people – including a senior ranked firefighter – and seriously injured many more at King’s Cross station.

A public inquiry by Sir Desmond Fennell published in November 1988, made 157 recommendations including:

1. At the heart of this Investigation lie three questions:
(i) How did the fire start?
(ii) Why was there a flashover?
(iii) Why did 31 people die?
How did the fire start?
2. It is clear from the evidence that people continued to smoke in the
Underground in spite of the ban in February 1985 following the fire at
Oxford Circus station. They did so in particular by lighting up on the
escalator as they prepared to leave the station. The Court was provided
with detailed information of 46 escalator fires between 1956 and 1988
and in 32 instances the cause was attributed to smokers’ materials.
3. About two weeks before the disaster, gaps were observed between the
treads and the skirting board on the Piccadilly Line escalator 4 at
King’s Cross. They were caused by the crabbing movement of the
escalator. Thus there were gaps through which a lighted malch could
pass. Moreover 30 per cent of fire cleats were missing, making it easier
for a match to fall through the gap and for a fire to flourish.
4. Beneath each side of the treads lay the running tracks of the escalator.
Those running tracks should have been cleaned and lubricated
properly. They were not. There was an accumulation of grease and
detritus (dust, fibre and debris) on the tracks which constituted a seed
bed for a fire and it was into that bed that the match fell. When the
forensic scientist inspected the scene after the disaster he recovered
several matches from the running track underneath the lower part of
the escalator.
5. When the skirting board of the escalator was examined it was clear
from the burn marks that fires had started on many previous occasions.
Happily, they had gone out. On 18 November 1987 the fire bed ignited
and the grease on the right-hand running track began to melt. The fire
had started.

The Parliamentary Under-Secretary of State, Department of Transport (Lord Brabazon of Tara) rose to move, That this House takes note of the report of the investigation into the King’s Cross Underground fire (Cmnd. 499).

The noble Lord said: My Lords, this is a sad and solemn occasion for debate. On 18th November 1987 a fire broke out on the Piccadilly line escalator at King’s Cross Underground station. It began beneath the escalator, but the flames spread up the escalator, and burst into the hooking hall. Tragically, 31 people died.

Before I speak further I should like to say that, as noble Lords will be aware, at 8.20 this morning a very serious train accident occurred approximately 300 yards west of Clapham Junction on the Southern Region. The 6.14 a.m. Poole to Waterloo train ran into the rear of the 7.18 a.m. Basingstoke to Waterloo train. Both those trains were full of passengers. An empty train from Waterloo then ran into the wreckage. My right honourable friend the Secretary of State for Transport will be making a Statement about the accident in another place. I am sure that your Lordships will wish to join me in expressing our deepest sympathy to the bereaved and the injured.

The Secretary of State for Transport (Mr. Paul Channon)

I beg to move That this House welcomes the thorough and comprehensive report by Mr. Desmond Fennell QC on the investigation into the King’s Cross Underground fire; endorses the Government’s commitment to invest in the improvement and modernisation of the Underground and its decision to provide £266m over the next three years for the implementation of the report’s recommendations; notes London Regional Transport’s constructive response to the report; and looks forward to continuing vigorous action by London Underground to implement its recommendations The House will agree that it is right to have a full debate in this House on the Fennell report, but it is also right that it should not have taken place until after London Regional Transport and London Underground had made their formal reply to the report. As the House will know, their reply was published on 6 February and copies were placed in the Library.

The King’s Cross Underground Fire: Were Frontline Staff to Blame for the Disaster?

The King’s Cross Underground fire was an appalling disaster in which 31 people lost their lives. The cause of the fire was found to be discarded smokers’ materials, probably a match, which fell through a wooden escalator onto the accumulated grease and debris below and caused them to ignite. Wooden boards on the escalator later caught fire and, at a critical point, a “flash over” occurred when fire jetted into the booking hall of the station. The particular mechanism which lead to the flashover was caused by the aerodynamics of the escalator tunnel and had not been previously recognised. The fire was reported by several members of the public, and was observed by members of London Underground staff when it could still have been brought under control. Despite this, “not one drop of water was applied to the fire nor any fire extinguishers used by the London Underground staff” (Fennell, 1988: 66). A water fog machine, which could have been expected to easily extinguish the fire, was not operated. Some staff were absent from their posts. Various errors by staff delayed evacuation, and meant that trains continued to disgorge passengers after the fire had been identified. Overall, the response of the London Underground staff present “may be characterised as uncoordinated, haphazard and untrained” (Fennell, 1988: 123).

This paper discusses the proposition that the front line station staff “who habitually treated fires as unexceptional events” were to blame for this disaster. The paper contends, however, that the disaster was caused by organisational failures which cannot be attributed to frontline staff alone. Rather this was a case of “collective blindness” (Turner and Pidgeon, 1997: 46). As Turner and Pidgeon (1997: 75) comment: “Just as a positive organizational achievement requires a chain of correct acts and decisions if it is to be of any significance, a large disaster requires an extensive chain of errors.”

The framework adopted for this analysis is a socio-technical one. It assumes that complex disasters result from an interaction of human and organisational factors. It would be possible to advance an a analysis of the fire based on considerations of safety culture and cultural theory (IOSH, 1994, Frosdick, 1995). The following discussion does explore some issues relevant to ideas of safety culture, but the dominant model used is the scheme described by Turner and Pidgeon (1997), particularly in a discussion of the starting point for the disaster, and the description of an incubation period.

King’s Cross fire: ‘I was screaming in pain’

In its 124-year history there had never been mass loss of life in a fire on the London Underground. But on 18 November 1987 that would change, as a flashover – a sudden and rapid spread of fire caused by smoke or fumes igniting – claimed the lives of 31 people at King’s Cross. Some of those who survived have been recalling the events of that night.

Daemonn Brody, who had moved to London five days earlier to start a new job, was on his way to see the Regent Street Christmas lights.

Spark, spill, candle, bonfire: no flame is too small to rage out of control. And in the entire litany of catastrophic blazes that have blighted Britain in the decades since the Blitzkrieg of 1939-41 – Piper Alpha, British Airtours Flight 28M, Grenfell Tower – the King’s Cross disaster of 18 November 1987 guards its secrets from everyone fortunate enough not to have been there, or known to someone who was.

‘It was like walking into hell’: King’s Cross fire survivor relives tragedy 30 years on

A memorial service will take place today to mark the 30th anniversary of the King’s Cross fire which killed 31 people.

One hundred people were also injured when a wooden escalator fire ripped through part of the underground station in November 1987.

He says it remains the most horrific experience of his life and that he was lucky to get out alive.