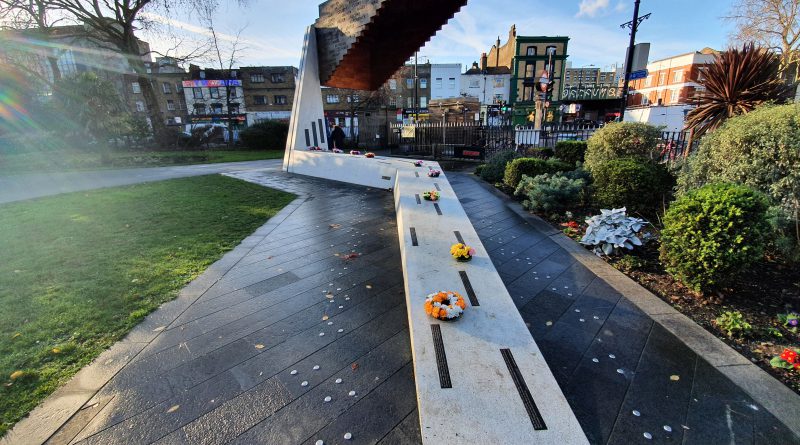 A list of those who died in the disaster, by last name, together with their age.

On 17th December 2017, a memorial was unveiled to mark the worst civilian disaster of World War II. It also represented the greatest single loss of life on the tube system, but curiously didn’t involve a train or vehicle of any description. On 3rd March 1943, an air-raid warning sounded and locals raced for cover at Bethnal Green tube station. Confusion and panic conspired to trap hundreds on the staircase entrance. In the crush that ensued, 173 were killed including 62 children with over 60 injured.

The worst tragedy on London Underground was in 1943 during World War II in East London at Bethnal Green Tube Station. This was an extension to the Central Line which had not been completed when war broke out and the unfinished station was taken over by London County Council to be used as an Air Raid Shelter during the Blitz of London by the Luftwaffe. On March 3rd. 1943 the largest loss of civilian life in a single non-military incident during World War II, happened in the East End of London. 173 people perished at Bethnal Green tube station. They were crushed to death by the weight of their own bodies. 62 of the dead were children.

Bethnal Green - disaster at the tube

It was the worst civilian incident of World War Two. Homeground looks back at the Bethnal Green Tube station disaster, and explores new evidence about the causes of the tragedy.

Bethnal Green Tube Disaster: 'I tried to black it out'

The Bethnal Green Tube Disaster of 1943 was the UK’s largest single loss of civilian life during World War II. More than 170 people fleeing from an air raid were crushed to death when the entrance to the east London station became blocked.

An avoidable wartime disaster which killed 173 civilians in London’s East End that was covered up by the Official Secrets Act is being marked by a conceptual art show on Remembrance Sunday.

Slanting sculpture that is fixed above the ground that sits above a long horizontal concrete plinth that has one sharp alternation in direction before rising up to the aerial suspended sculpture. The vertical plinth has plaques embedded that list all of the victim’s full names and ages.

Bethnal Green Tube disaster: 75 years on, and 173 victims of wartime tragedy finally have the memorial they deserve

74 years since the Bethnal Green tube disaster, lessons still need to be learned

Finally the deaths of 173 people in 1943 are marked. But since then there have been Aberfan, Hillsborough and Grenfell: preventable disasters, unjustly handled