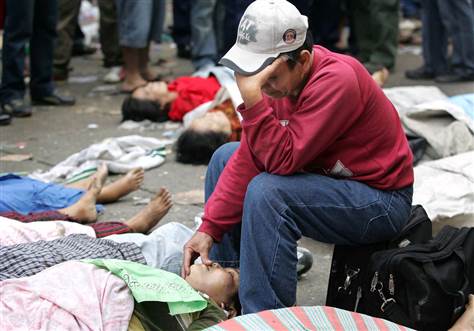 An official probe has been ordered into the cause of a stampede that broke out at a Philippines stadium today, killing 73 people and injuring more than 300 in a crush to attend a popular game show that was giving away cash and prizes.

Some people had camped for days to get into the taping of the Wow-wow-wee variety show, and officials said they did not know what triggered the crush outside the gates of the stadium in the Manila suburb of Pasig.

The fatal crowd stampede that occurred on February 4 at the entrance to the PhilSports sporting arena in Pasig City, Manila, reveals the poverty and desperation afflicting workers in the Philippines.

The stampede resulted in the loss of 74 lives, with 627 injured. Most of the victims were elderly women who were crushed against a steel gate on the stadium’s sloped entrance drive, trampled underfoot, or crushed under other bodies as the crowd surged forward to get a seat in the stadium. One child was killed.

A stampede outside a sports stadium in the Philippine capital, Manila, has left at least 73 dead, many of them women, with more than 300 injured.

Tens of thousands of people had gone to the stadium for the first anniversary recording of a popular TV gameshow.