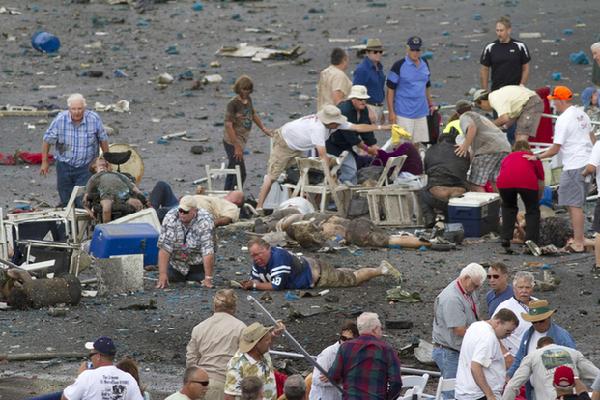 A World War II-era fighter plane flown by a veteran Hollywood stunt pilot plunged Friday into the edge of the grandstands during a popular air race, killing three people, injuring more than 50 spectators and creating a horrific scene strewn with smoking debris.

Reno police on Saturday raised the death toll in the crash of a World War II-era plane at an air race, bringing the total to 9, including the pilot.

RENO (BNO NEWS) — Police on Saturday said a total of nine people were killed on Friday when a World War II aircraft crashed during the Reno Air Races at Reno-Stead Airport in Nevada. Sixty-nine others have been injured.

Reno, Nevada (CNN) — “Mass casualties” were reported at an air show after a plane slammed into the box seat area in front of a grandstand at the National Championship Air Races and Air Show in Reno on Friday, a spokesman for the show told CNN.

The empennage assembly of the experimental race plane separated and the aircraft crashed during the first lap of an unlimited class heat race at the Reno National Championship Air Races. The wreckage was spread over approximately a 0.5-mile path. The first item located in the wreckage path was the lower half-span of the rudder control. Approximately 1/8 mile further along the debris path was a wreckage field about 500 feet long containing the remainder of the empennage (including the rudder trim tab), except the rudder upper halfspan. The rudder upper half-span, including the mass balance, was located about 1,900 feet to the right of the debris field. When laid together, the rudder exhibited a shredded appearance through the midspan forward of the rudder trim tab location. Review of a spectator video recording taken from the rear in the seconds before the accident showed that, while the other parts of the aircraft were visible, the rudder and vertical stabilizer were not visible. The video technician opined that the disappearance of the vertical fin and rudder might have been the result of ‘video smearing’ if the rudder was moving rapidly and the video image recorder rate could not keep up with it. The precipitating event was not determined during extensive reconstruction and analysis of the empennage.

US vintage aircraft crashes into crowd

A vintage Second World War fighter plane crashed near the grandstand at Reno’s annual air race, killing three people and injuring many others.